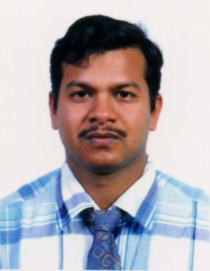 Professor Dipti Ranjan Sahu is currently an Associate Professor of Physics in the Department of Natural and Applied Sciences at the Namibia University of Science and Technology (NUST). He received his doctoral degree in Physics from Utkal University, India in the year 2003. He has worked as a research fellow, postdoctoral researcher and visiting scientist at institutions such as the Institute of Materials Science (India), National Taiwan University, National Cheng Kung University (Taiwan) and the University of Witwatersrand (South Africa). His research focus is on multifunctional materials including nanomaterials, ceramic, composites, spintronics, magnetic materials and application of functional materials in devices.

Professor Sahu is dedicated to his research in Multifunctional Materials and Nanotechnology.  Over the years, his research activities have contributed to the understanding of concepts such as high-density memory devices, multiferroics material, new generation dilute magnetic semiconductors, electrochromic cells, nanowire and nanoparticle solar cells and intelligent glass curtains for advancing multifunctional thin film materials in the next generation nanoscale electronic devices. His significant novel research findings gained national and international recognition in the field of multifunctional materials and devices. His pioneering research on transparent conducting oxides has provided a new dimension to the energy field. On the other hand, his collaborative research work on process flow for fabricating magnetic perovskites on silicon, stimulated research interest for many companies including Intel for application in high-density memory.

He has strong research collaborations with researchers in the USA, Germany, South Africa, Taiwan and India. During his 15 years of research experience, he has published 80 international peer-reviewed journal articles, two (2) book chapters and more than 100 research articles in conference proceedings and meetings. His research publications received more than 2100 citations and Prof Sahu currently has a Scopus H-index of 23. He also served as a reviewer for more than 25 international journals and has reviewed more than 200 articles. Professor Sahu was awarded as C1 rated researcher (2011-2016) by the National Research Foundation (NRF) of South Africa as well as being a grant holder of three (3) NRF funded projects during this period. He is also on the editorial board of journals and books such as Imaging and Radiation Research and Intech publisher. He has served as examiner of Masters’ and PhD theses for several universities in different countries. Professor Sahu is the recipient of many international awards such as the Australian Research Council Fellowship, Spanish Government Excellence Research Fellowship, National Science Council Taiwan Fellowship and Council for Science and Industrial Research Fellowship in India.  He has also organised international conferences and served as conference and session chairperson. Currently within the Faculty, Professor Sahu is the research co-ordinator for the Department of Natural and Applied Sciences and is the principal researcher within the  Nanotechnology and Material Science niche area.